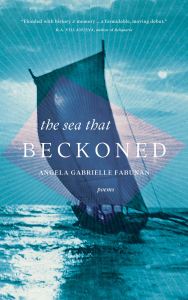 Angela Gabrielle Fabunan’s debut, The Sea That Beckoned, is a meditation—no, that’s too sedate—a fixation on the many ways one (especially one who migrates) looks for home—in the place one was born, in a new land, in memory, in language, in each other—and the many ways it is lost. But more than that, this is a book about the self, and how conceptions of home define, complicate, or even threaten that self. In a world reaching for the concrete, this book crashes into every certainty, scattering the concrete as a wave scatters sand. Here, home and self are as vast, elusive, and changeable as the sea. As soon as you scoop it up, it’s already slipping away.

“There was once a country I resided in, but it was neither here nor there,” Fabunan’s speaker says in “Fair Game.” In “Midway,” the speaker says, “In / or Out—perhaps there’s a place we can call home, / but right now there’s just this, an in-between…”. This “in-between” is the vessel that holds this book. The speaker, unmoored, is “neither here nor there.” All homes, all selves ebb and flow in the speaker’s mind, each dissolving a little as something new is ever-forming: “a life spent / gathering the arithmetic of loss” (from “First Day”).

This “in-between” exists in form as well: one line gives, another takes away. And imagery: spring growth replaces decay. Images from one home, fractured, slip in and are quickly replaced or bump up against images of the current home: “the shadows made from clouds appear like / dreams, the old and new mingling, the fluidity of sky and ocean / marrying the horizon” (from “Migration Story”). The place lost exists as a film over every current action, home under the ghost of home—image under the ghost of image—and “in the end, / only memory remains” (from “Fishnet”). Memory, slippery as a fish.

And language is slippery, too, like America, its promises never fully realized: “back then, we were gods, knowing nothing / but what we desired and that we’d have it” (from “The Other Shore”). Language can define what is home and what is not, or not yet. It shapes one’s understanding of the world, just as understanding shapes language. Learning the language of place can give one power. Forgetting the language of origin can fracture self. Combining language can make one other, something new that can be powerful, yes, but also threatened.

Fabunan’s glimpses of the Phillipines are vivid, and like the speaker, “you float / in ever changing phases” (from “Cadena de Amor”), swept up in the grief, the love (for there can be no grief without love), and the movement. As the speaker moves forward, becomes something new, something is also lost so that the body, the mind, becomes a graveyard. The speaker is haunted and haunting: “all I wanted to say: hello and goodbye at the same time” (from “Midway”). She will “bloom,” but at the same time, she will “wither,” and isn’t that pain, that ache, what it means to be fully human? And isn’t there, in that in-between, a kind of wholeness?

For all this uncertainty, this in-betweenness, the proliferation of questions rather than answers, Fabunan’s debut is not hopelessly adrift, not hopeless. Rather, it is the splash that ripples out, creating possibility: “we beings are more than just language, / more than accent or the drift / between homes, each / catapult into the unknown / turns shadows familiar” (from “Model Minority”). In Fabunan’s book, all things exist and can exist, even if all things are not present. Reading this lovely book is like dipping one’s toe in the sea and remembering its size and connections. This is a book for anyone who has ever lost home and searched for home, for everyone still searching.

You can pre-order The Sea That Beckoned here.