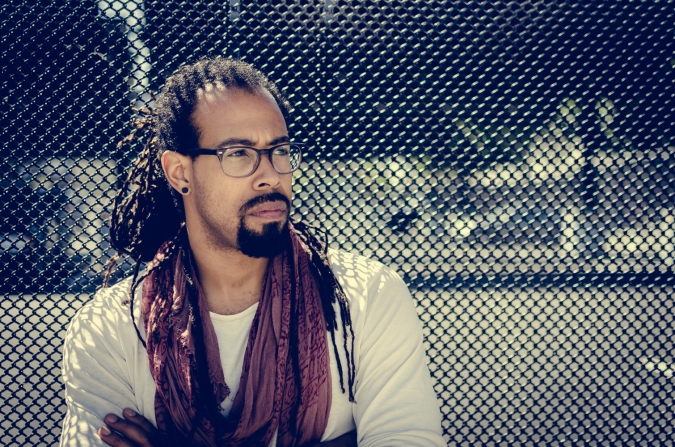 nick johnson is the featured writer for the first issue of Night Music Journal. nick was born and raised near the brackish Chesapeake Bay but now calls the Bay Area waters home. He received his MFA from the California College of the Arts. His work has been featured on KPFA’s Rude Awakening, and has appeared in The Cincinnati Review, Black Renaissance Noire, Eleven Eleven, Metazen and other fine journals. His first book of poems, music for mussolini, was recently released by Nomadic Press. Additionally, he wants you to know, he enjoys telling long-winded stories, Instagraming, making spicy curries, and drinking whiskey; typically in that order, but not always. Learn more at his website, www.nickjohnsonpoetry.com.

Why poetry? What pulled you in, and who was the very first poet you read/heard?

I started writing short stories as a kid. That was my jam for a long time. I think my initial impetus to write sprang from the fact that I couldn’t find anything I really, really enjoyed reading; so I started writing the stories I wanted to read. I look back now and know that I just hadn’t been exposed to the right stuff, which really shaped who I am today… and I guess what I mean by that is that I might not be writing today if I had fallen in love with books at an early age. Who knows…But why poetry was the question. I had a teacher in middle school, Ms. Castle, who had us write poems for an assignment one day. It was the first time I remember writing a poem. Anyway, she really liked mine and asked me to read it to the class. I was terrified. After class she pulled me aside and told me how much she enjoyed my poem and my reading of it. She encouraged me to keep writing and speaking in front of people. It took a long time to get comfortable with the public speaking and reading, but I am so thankful that she gave me that push. And I guess what pulled me in with poetry was how elusive it is, how ephemeral; and I love the instant gratification of finishing a poem…fiction takes FOREVER. lol.

If you were the last person on earth, and you pulled the last book from a pile of ash and cinders, what do you hope it would be? Why?

Wow. That’s such a beautiful question and so hard to answer. Of the books that I can think of off the top of my head, it would have to be Kafka on the Shore. I really love Murakami. His books are like warm blankets, intricately woven with magical realism, poetry, mystery, unique and captivating characters and sentences that ebb and flow like the tide; you’re wrapped in and unsure whether you’re dreaming or awake, witnessing the magic or a part of it. He’s really, really good. Thus far Kafka on the Shore is my favorite book; it’s a thriller, it’s poetic; it’s…yeah, I’m pulling that from the ash for sure.

I think art, no matter what the genre or medium, should hold a bright light up to society and allow us a new way to view ourselves and our surroundings. I think it should challenge, shape, and show us who we are at our core, show us what we believe in and what we hold sacred.

What was the first piece you ever had published? Are you the same person who wrote it, and if not, how have you changed?

I had a few things published while I was an undergrad, but I don’t remember what those poems were…my first major publication was in Black Renaissance Noir. They published three of my poems when I was in grad school. I would say, I’m not the same person who wrote those poems. That poet was a little more direct and more willing to show his readers he knew something he could impart to them. I think now I’m a bit more exploratory, my writing now is a search.

Nomadic Press published your first book, music for mussolini, earlier this year. What was the experience like? How do you feel now that you have your first book on your shelf?

Yes; my first book of poems, music for mussolini, was published by Nomadic Press in March of this year. And it feels amazing! I can’t even tell you how good it feels to see my book on my shelf, let alone at City Lights or Alley Cat Books, or in countries I haven’t been to like Belgium or Japan. All thanks to Nomadic Press, and the help of my friends all over the world who’ve supported me…it’s a wonderful feeling. But more directly to your question, working with Nomadic has been amazing! They really care about every detail and they’re so willing to work with you and hear your vision for your book. My editor Michaela Mullin spent many evenings with me, on the phone, talking about not only what was and wasn’t working but why it was or wasn’t working, and the juxtaposition of sections…she was an absolute gem and my book is so much better because she had her hands on it. I could go on and on but, in short, J.K. and the folks are an absolute pleasure to work with.

Are you working on a second book? What’s your work’s center right now?

I might be…time will tell. I guess right now I am working on my “outdoor poems,” which center on nature along with past and current romantic relationships…at least that is what I think I am writing about…one never really knows.

Name some poets you’re really excited about right now. Who do you have on your shelf/in your ear/on your mind?

Let’s see…Ilya Kaminsky, MK Chavez’s Mothermorphosis; I’m rereading Gary Jackson’s Missing You, Metropolis; and I am super excited for Fisayo Adeyeye’s forthcoming book from Nomadic Press…that’s what comes to mind at the moment.

What is the biggest adventure you’ve had? What adventures do you hope to have soon?

Ah, well I guess my biggest adventure to date was probably spending five weeks in Thailand, with my (then) girlfriend…we actually just got married ;-)…which was also a pretty big adventure. But spending five weeks exploring Thailand was absolutely amazing, and this December we’re heading to India for three weeks for our honeymoon…it should be pretty epic and we’re super stoked about it.

If you could go back and say anything to your teenage self, what would it be?

I wouldn’t say anything to my teenage self. I think my teenage self needs to go through the same things I did without any interference from me in order to end up where I am now. The journey I took to arrive at this very moment was not easy but I love where I am and I might not be here if something were altered, if I lived life with a different perspective.

What advice would you give a poet just starting out?

When I was a young poet I thought I could only learn from the poets I admired…I eventually came to find out that wasn’t true…read as much as you can…and learn from everything you read…except for the stuff you hate, totally ignore that shit. lol.

You can read nick johnson’s work in the first issue of Night Music Journal, which will be released November 1st. You can also get a copy of nick johnson’s book here or here. 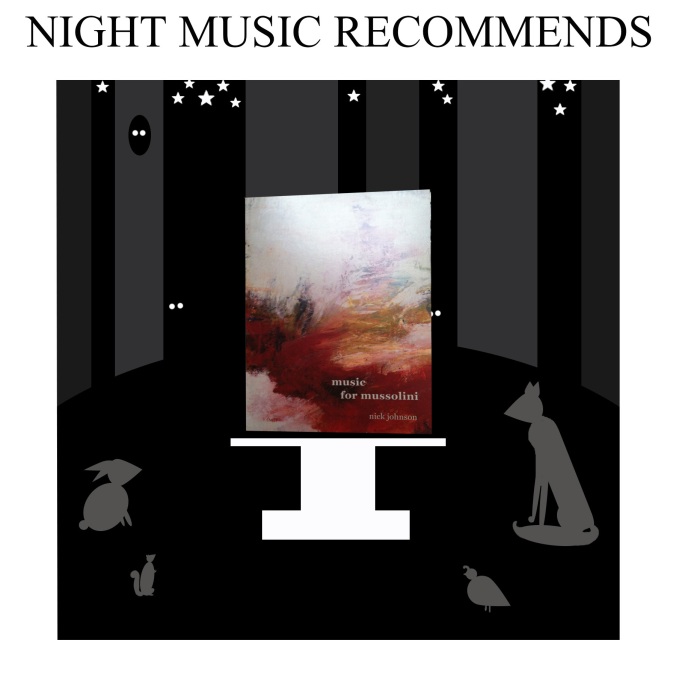